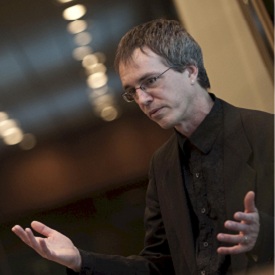 What was your project about?
I was awarded a Fulbright Scholar grant to teach and do research at the University of Oulu in Finland. I worked with historical archeologists at the university who were mostly dealing with the last five hundred years, some of them looking at the late medieval period. Some of them were examining the 18th and 19th century. I am interested in all those periods. I worked with them on 19th century archeology. I am also working on landscapes myself in a book comparing landscapes of Finland with those of Indianapolis. It was a comparative study.  The focus of my Fullbright project was to finish some 18th and 19th century work I had begun with my colleagues at Oulu on previous visits. We finished a paper and submitted it to publication, and it is in press. During that period, I had already begun to play with the idea of doing a book comparing Europe and North America based on my archeological material here. I began working on that book while I was there. I also taught two classes, a historical archeology class and material culture. Both of them were basically the same courses that I teach here, just shorter.

How did you establish relationship or develop the project idea with the host organization?
I had established relationships on previous visits so I already knew the colleagues at the university.  I had a small grant from the Vice President of Office of International Affairs to give a lecture at a conference two years ago. After the conference I met the colleagues from the University of Oulu. I was getting ready to become president of the Society for History Archeology at that point and they knew about it. The society is the major international voice for historical archeology. They said “perhaps we could find a way for you to visit us for few weeks.” I went over and we looked at the archeological materials they had already dug up.  They had done a great job. I liked the place and the team and realized we could probably do something together. That was the point when I started thinking what I could do for a semester.  I thought the Fulbright Scholarship Program was the right place to look.

What were the benefits of the Fulbright project?
I think the best part and the worst part is that it is 24 hour ethnography. Everything that we do, sitting in our home, going to a grocery store, riding a bus, everything that we do not think about in everyday life, you are always analyzing everything. It was interesting and exciting. Everything is new and novel.  It takes a long time to live in a place before you passed over all those things.

I went to the Czech Republic, Austria, Germany, UK, and Sweden. It is a little bit exhausting to always be on the go, and most of those places had language barriers. We are fortunate to be a lingua-franca almost all of the academic world and people speak English. Nevertheless, it feels bad not to speak the local language. If you are conducting an ethnographic study and willing to talk to local people in their native language consider taking a language class. I took a Finnish class to show faith. I would like to go back and it will be better to learn more Finnish.

The Fulbright Program in Finland particularly is very well organized. They have a three-day orientation for all Fulbright Scholars from the US visiting Finland. Part of the program addressed practical matters.like getting around Finland. If I had an issue, they would have helped me right away. It was the same for the university. They were happy to have me and I had very good support.

My son was there with me and went to an International Baccalaureate Degree Program in Oulu. He had great time and is considering going back there for graduate school. My colleagues who went to Southern Finland had their kids go to school in those places without any problem.

What kind of challenges did you confront?
Finnish students are very different from their peers here. They all speak English very well but they are not always confident of their speech. From my teacher view of point, they are hard to read. In the US, we have a sense of the group in a few weeks. They do not engage in small talk and some of the material I gave was novel to them, as well. After few months, the folks started to talk to me in the hallway. I cannot say that this was a challenge but nevertheless a different way of communication.

What was your contribution to the host country?
Some of my writings also appeared on the local press. The universities there and especially anthropologists at the Oulu University are increasingly becoming more committed to community engagement, especially watching the examples of the US and UK. The Fulbright program in Finland wants scholars to go out, give public lectures and share what we are doing. I gave a number of talks in Oulu and lectures at the University of Vienna, in Czech Republic, and did three conferences in UK.

What would you recommend to the Fulbright applicants?
I was there only for a semester.  I had been there a handful of times and had already done research. I knew the colleagues personally and I hit the ground running. Retrospectively, I look at how much I could not have done without prior experience. I probably would have been teaching courses only and may not have been able to produce any publication out of it.  Preparation means a lot. When you lay the ground work, you can come up with a very solid application. If you have a scholarly reason to be in a place and ideally some relationship with people there already, you are more likely to have success and less likely to be shocked when you get there.