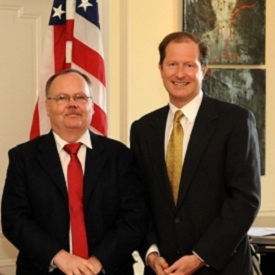 What was your project about?
I received a Fulbright Fellow for the spring semester 2012 at Uppsala University in Sweden, as the Fulbright Uppsala Distinguished Chair in American Studies. I taught a course in U.S. mass media and collaborated on a book project about the Americanization of Sweden with colleagues at the Swedish Institute for North American Studies.

How did you establish relationship with the host organization?
I am originally Swedish and pursued higher education in Swedish Universities, one of which is Uppsala University, where I took courses in my youth. I received my Swedish degree, Journalist’s Certificate, from the Stockholm Institute of Journalism, nowadays a department of the University of Stockholm. I have a long-standing interest in the Swedish-American press, having published several studies of editors, newspapers and readers. I am also a member of the Swedish-American Historical Society and contributor to the Swedish-American Historical Quarterly. Therefore, I have close-working relations with the institutions I collaborated with in the Fulbright project. When there was an open call matching with my areas of interest, I applied for the Fulbright Scholarship. It was not hard to agree on the scope of the project because of my existing relationship.

What were the benefits of the Fulbright project?
It was an interesting experience to teach in a different setting. I found students very updated and knowledgeable about the American media. The primary benefit of the scholarship was the ability to conduct research in my particular country of interest and collaborate with other experts.

What kind of challenges did you confront?
Since I am from Sweden and have a family there, I did not have any problems. The language would not be an issue for any other faculty because the level of English is advanced among Swedish people.

What would you recommend to the Fulbright applicants?
I would recommend any Fulbright candidates to make clear of everything with the host organizations before they leave. The Fullbright office in Stockholm readily answered questions about taxes and practical matters; however it was a little unclear on what my home institution would do. In the end, I was told that the School of Journalism would make up the difference between my regular IU Salary and the Fullbright award, making my semester considerably more stable financially.