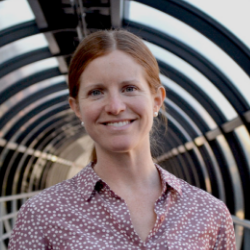 Aliza Frame is the Director of International Student and Scholar Services for the Office of International Affairs. She provides leadership for the development and delivery of services and programs in support of international students and scholars at IUPUI.

Frame has more than 15 years of experience in international education. Upon earning a Bachelor’s degree in Conflict Studies and Spanish in 2005 from DePauw University, Frame worked for Earlham College’s Border Studies Program in Ciudad Juarez, Mexico. She worked in an Indianapolis immigration law firm, then returned to international education in 2008, holding a variety of positions at DePauw University in study abroad and international student and scholar services. Frame has also lead several short-term study abroad programs in Peru, Brazil, Thailand and Vietnam. She earned her Master’s degree in Executive Development for Public Service from Ball State University in 2014. Frame became a proud IUPUI Jaguar in 2018 when she joined the Office of International Affairs.

Originally from Indiana, Frame enjoys spending time with her family and friends, working out, cooking, gardening and traveling.