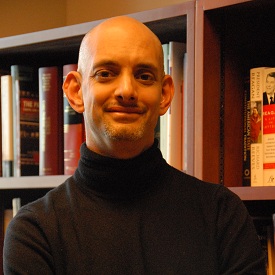 What was your project about?
I held the Fulbright-Dow Distinguished Research Chair of the Roosevelt Study Center in Middelburg, The Netherlands in 2008. This is a nonprofit organization that supports research on American politics and history, primarily for European scholars and graduate students. They always have an American scholar in residence for a four-month period. I was there to work on a project related to Franklin D. Roosevelt which would soon turn into a book.

How did you choose this project?
I searched for a Fulbright Scholarship which would be applicable to law professors, and would also fit my interests. When I did [choose], it came down to, really, one that would be a good fit—and that was the one in The Netherlands.  In that sense it was fairly easy, because this is what I applied for.  The others related to law either require that one, you are researching the domestic law in that country (which I was not going to do), or you would be fluent in the language of that country. Some of them were teaching fellowships, but I wanted to do a research fellowship. With those qualifications, that is why I ended up applying to the one in The Netherlands, because this was the only one that did not have any of those three. It was purely research. There was no requirement for fluency in Dutch. They required someone who does American research, not someone doing research on The Netherlands.

What were the benefits of the Fulbright project?
There are several benefits. First of all, there is a lot of value in being exposed to different points of view from researchers on the kind of research you do. The European perspective on the U.S. is quite different from the American perspective on the U.S. All of my colleagues at the center where active researchers with written books about U.S. history or U.S. politics, but we come from totally different points of view. We would have coffee every morning and chat about our research topics. The three colleagues that I worked with put together a book after my sabbatical. I met them again in the U.S. in 2009. The Fulbright Scholarship is also good for creating such contacts and knowledge sharing.

Those were special benefits overall and beyond the benefit of being a Sabbatical, generally. Fulbright folks were very helpful in proving assistance of any sort that I needed. The organization was very supportive and I did not have any problems. The experience was wonderful. You could say The Netherlands is an easy country to live in, compared to some other places where some do Fulbright scholarships, but in my case everything went perfectly.

What was your contribution to the host country?
I was there during the American presidential election, when President Obama was first elected. I was asked to do a number of talks to local groups about the election.  I also delivered a talked in the Law Department in Copenhagen about aspects of my research.

What would you recommend to the Fulbright applicants?
It depends on what they are doing there. If you are teaching a class, there is preparation required for that. It necessitates some adaptation to the culture of which you will be teaching. For the last three years I have been evaluating the applications for law-related issues. (This is asked to former Fulbrighters.) In the first round of screening, all I was asked to do is to sort the strong ones from the less strong ones.  One consideration besides the general quality of the application would be to what extent someone has a clear understanding, and why they want to go to the particular country. This does not require you to have a lot of experience in that country before. In fact, it might be better not to, because it may seem better to give priority to someone who has never been, or has not been often. It helps to say why your research is tied to this particular university or program, as opposed to what comes across as, “I would like to be overseas, here is one opportunity.”