In May 2017, the Office of International Affairs in partnership with Housing and Residence Life received a $25,000 grant from Chancellor Paydar’s Welcoming Campus Innovation Fund for its project, “Creating Global and Local Community through the International House.”

Support from the Welcoming Campus Innovation Fund will provide a scholarship program for International House (I-House) student leaders and bring I-House alumni with established international and domestic careers back to campus during IUPUI’s 50th Anniversary year, 2018-19. In Fall 2017, I-House selected its inaugural two Global Scholars for the 2017-18 year: Deepali Balasubramani, an Indian student from Dubai, UAE, and Nova Ellis, a U.S. student from Pendleton, Ind. 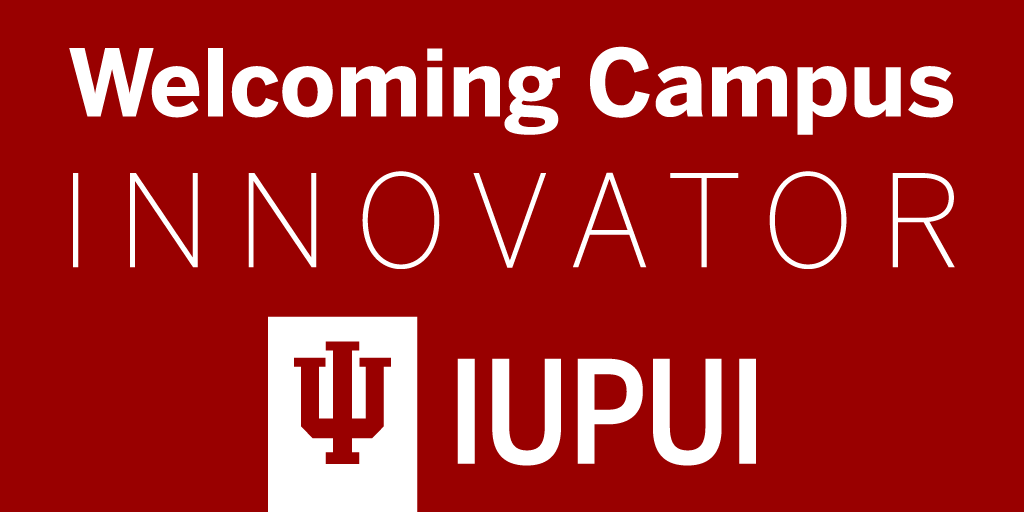 Since 1991, I-House has served as a Residential-Based Learning Community on the IUPUI campus and has housed more than 1,100 American and international students living side by side from nearly 20 countries each year. Through immersive living with those from other countries, American and international residents alike take part in dialogue and develop friendships that allow them to understand cultural differences and be better prepared to solve global challenges facing their generation.

“By expanding International House programming and launching the Global Scholar program, I-House has the potential to bolster student learning on campus and in partnership with our metropolitan area as Indianapolis becomes a globally engaged city,” said Gil Latz, project lead and Associate Vice Chancellor of International Affairs at IUPUI.

The Welcoming Campus Innovation Fund award will support the inaugural two years of the Global Scholar program, funding one U.S. and one international student resident with a $2,500 housing stipend each year through 2018-19. The award incentivizes student leaders to stay for a second year in the residence, during which they will work to build intercultural community through promoting resident participation in I-House activities that support the global learning goals of the I-House program.

Announced in 2016 with $1 million in total funding, the Welcoming Campus Innovation Fund is designed to support collaborative, sustainable projects proposed by IUPUI faculty, staff, and students that help make IUPUI a destination campus that supports the highest levels of achievement across campus.

Funding from the grant will enhance programming by helping to bring back I-House alumni for speaking engagements on campus, as well as scale up existing I-House activities including resident field trips and service projects. I-House community events to be piloted during the 2017-18 year include a World Religions Day in January 2018 and an alumni panel at the 14th Annual IUPUI International Festival on February 14, 2018.

Deepali Balasubramani, the 2017-18 international Global Scholar from Dubai, is a sophomore majoring in Biomedical Engineering and also serves as an International Peer Mentor at IUPUI. Balasubramani lived in I-House two years ago and after a year living off-campus, was eager to return. Balasubramani is passionate about leading I-House teams on service projects.

“It’s important to learn about different cultures and to work on the skill set of being accepting of different ideas, which is valued by workplaces today,” said Balasubramani, who is considering a career in 3D Bioprinting.

Nova Ellis, the 2017-18 domestic Global Scholar, began an interest in international activities when she took Spanish in high school, and she now has a bucket list goal to visit every Spanish-speaking country in the world. As a freshman in I-House last year, she formed close friendships with residents from many nationalities and became very involved in planning house activities. Nova is excited about working to build more community in I-House during her second year. Ellis is a 21st Century Scholar majoring in Chemistry and Pre-Veterinary Medicine.

“Living in I-House was different than I thought it would be because I’m set in my ways and hadn’t lived with others from other cultures before,” said Ellis. “We had to work through some challenges, but it’s been a lot of fun to see how people from other cultures live. I’ve met my best college friends through I-House.”

Support I-House leaders who will impact our world 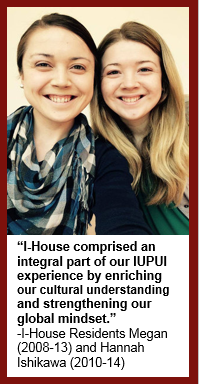 You can empower a leader and sustain our global community at I-House.  In 2016, we launched the I-House Global Scholar program to fund a second year on-campus housing resident to lead international programming while building leadership skills. Global Scholars will receive a $2,500 annual stipend.

Visit www.myiu.org/give-now, select your preferred Gift option, and type “I-House” in the search box. All gifts received in 2016-17 will go to the I-House Global Scholars program.

Questions about the Global Scholars program?