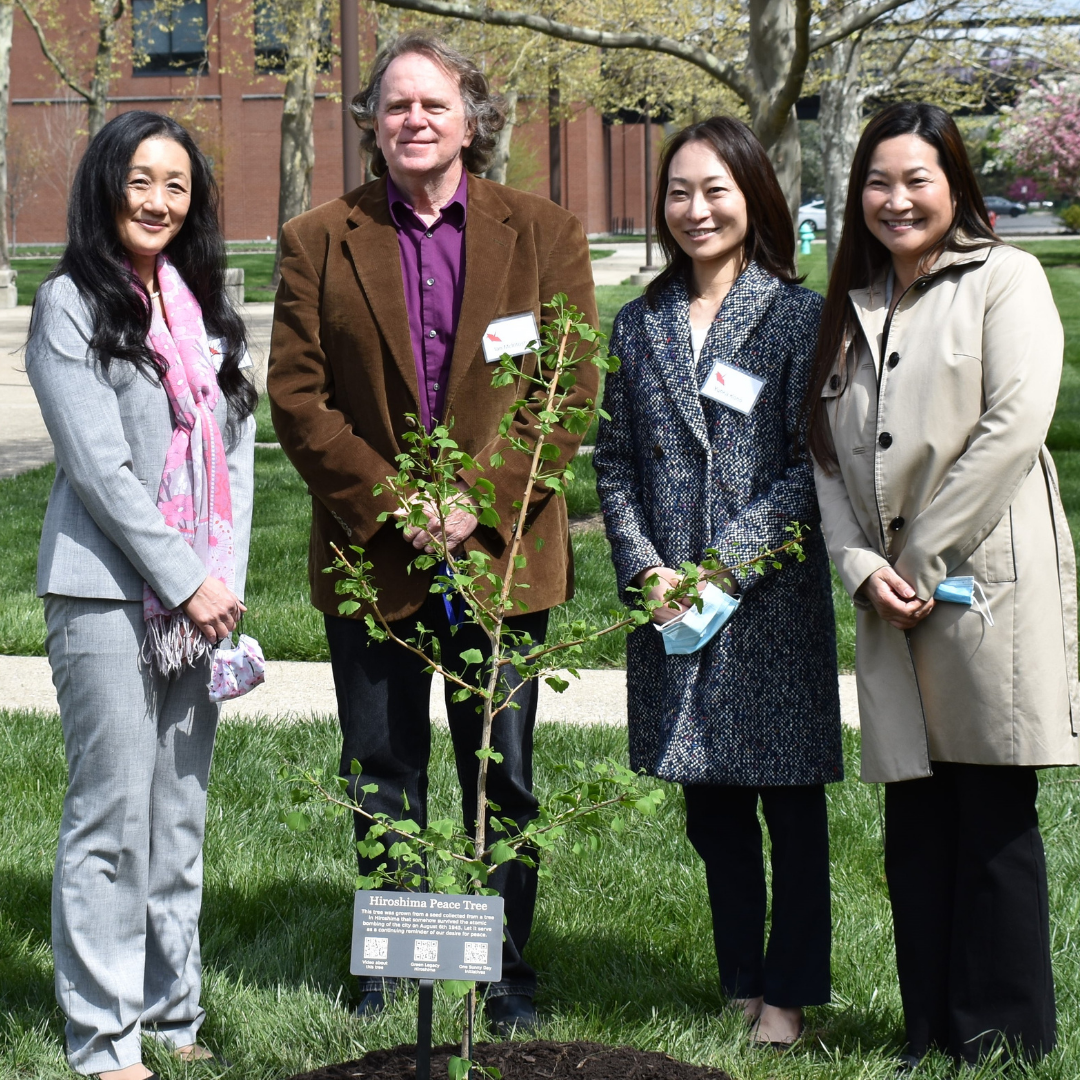 Message of Peace from Hiroshima: SDG 16

On April 16, 2021, students and faculty of the Japanese Studies Program in the School of Liberal Arts at IUPUI were joined by a select group of invited guests to plant the sapling, which was grown from the seeds of a 300+ year old tree in Hiroshima, Japan that survived the atomic bombing of the city in 1945. The Green Legacy Hiroshima project seeks to promote peace across the world and educate generations about the consequences of nuclear weapons. IUPUI’s participation in the project is a joint effort between the Japanese Studies Program and the Office of International Affairs.

“We want these Hiroshima seeds to become active ambassadors promoting the message of peace and educating the public about the consequences of nuclear weapons.Keiko Kuriyama, Director, IUPUI Japanese Studies Program 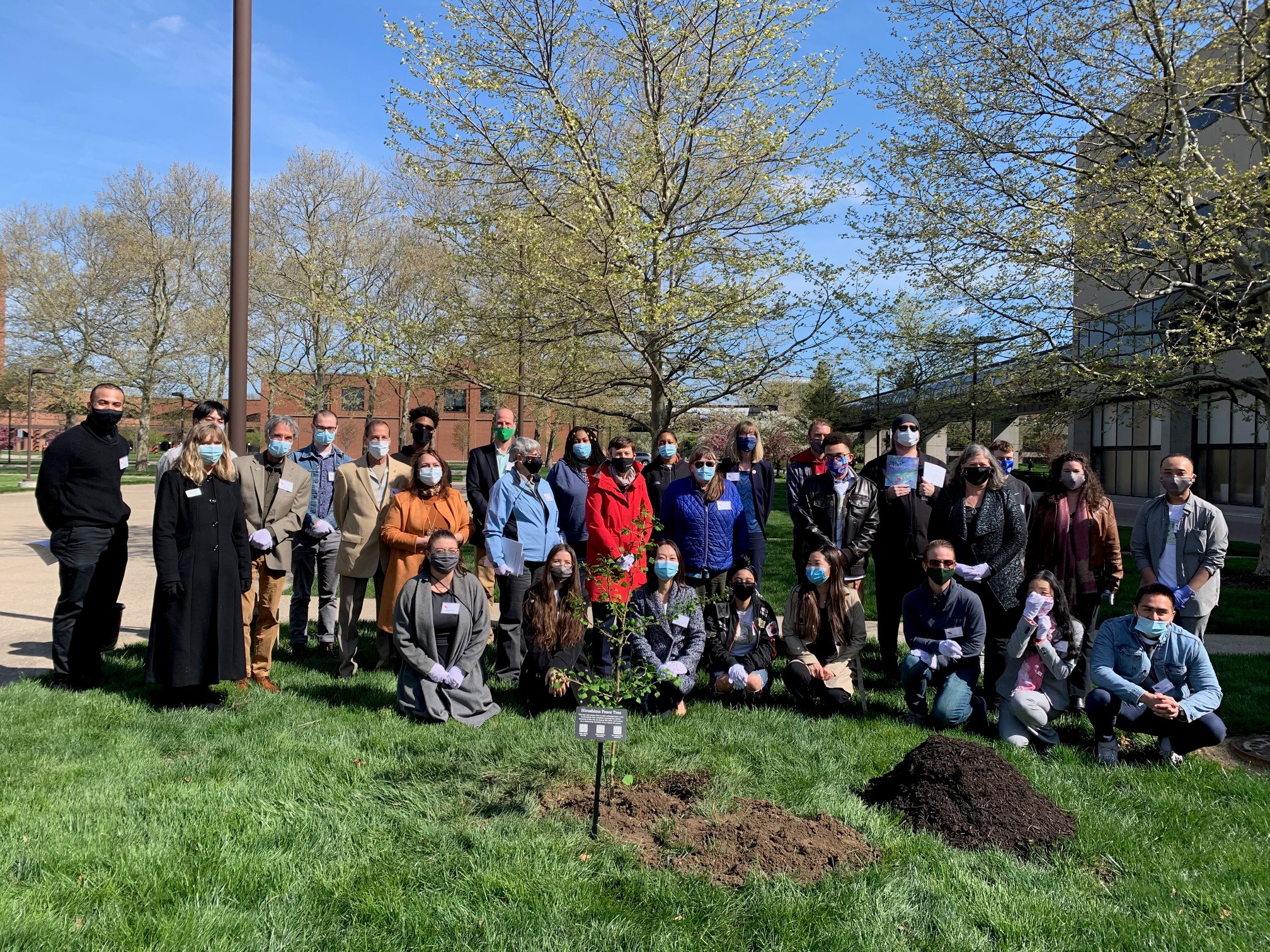 The IUPUI Japanese Studies Program, led by Dr. Keiko Kuriyama, in partnership with the IUPUI Office of International Affairs and the IUPUI Greenhouse, are cooperating with the Hiroshima Green Legacy Project to bring seeds from the few remaining trees that survived the Hiroshima A-Bomb blast of 1945 to the IUPUI campus and across Indiana. Linked to UN Sustainable Development Goal 16 on peacebuilding, the Hiroshima Green Legacy Project which is summarized in this YouTube video was established to spread the seeds of Hiroshima's A-Bomb ‘survivor trees’ worldwide as a gesture of reconciliation and peacebuilding.

On April 16, 2021—with the planting of a 3-year-old sapling grown from a seed from a 300-year-old Hiroshima Gingko tree on the IUPUI campus alongside Democracy Plaza in Taylor Square—IUPUI became active ambassadors of this peace message. The goal of the IUPUI Japanese Studies Program is to educate the public on the on the devastating consequences of nuclear weapons and thus contribute to the United Nations goal of promoting peaceful and inclusive societies at the national level, and cooperation at the international level. The next stage of the project is to share more Hiroshima seeds and seedlings with other communities in Indiana, including secondary schools, colleges, churches, parks, and arboretums.

The planting ceremony at IUPUI was attended by senior IUPUI administrators and faculty members in the School of Liberal Arts, and community dignitaries, including Jeremy Kranowitz, the director of Keep Indianapolis Beautiful, and Charlie Wiles, the director of the Center for Interfaith Communication. See an excerpt from the official press release here:

Ginkgo tree with historic roots in Hiroshima is planted as a symbol of peace at IUPUI: News at IU: Indiana University
Amber Denney

...The highlight of the event, which was organized and managed with the help of students in E384: East Asian Nationalism and Cultural Identity, a class taught by Dr. Izumi Harris, was the heart-felt presentations by students. Their personal reflections on the impact of the bombing of Hiroshima and Nagasaki through music, art, poetry and other forms of expression was described by them as their own personal ‘peace declaration.’

The origins of the planting at IUPUI go back to March 2020 when the Japanese Studies Program hosted the "Hiroshima Nagasaki A-bomb Poster Exhibition" at the Cultural Arts Gallery at the IUPUI Campus Center, along with a symposium "Hibakusha (Survivor) testimony: Hiroshima 1945 to the U.S. 2020". The symposium included the testimony of Dr. Hideko Tamura, an A-Bomb survivor and founder of One Sunny Day Initiatives. A Hiroshima Peace Ambassador, Dr. Tamura is also an ambassador for the Hiroshima Green Legacy Project, which is where the idea for planting the tree at IUPUI was born.

The Spring 2021 E384 class taught by Prof. Izumi Harris included zoom lectures from Hiroshima survivor Kiyomi Kono, and Mr Steven Leeper, former Chairperson of the Hiroshima Peace Culture Foundation. Dr. Harris believes that an important role of higher education is to help students develop a sense of humanity in their attitudes towards all challenging social issues. In her previous teaching experience at Nanjing University in China, Dr. Harris’ taught Japanese language and culture to Chinese youth. How did she address the 1937 Rape of Nanjing by the Japanese during the class? Hatreds run very deep, but in an exercise designed to build trust, she conducted a fieldtrip for her Chinese students to the Memorial Hall of the Victims and then led a discussion on ways to build peace through compassion, empathy, apology and forgiveness. That same degree of sensitivity is evident in her work on the topic of Hiroshima and Nagasaki at IUPUI. Some will argue that the A-Bomb was a necessary evil to end WW2, while others say that Japan can never be forgiven for the atrocities that they committed in Manchuria and Nanjing, but Dr. Harris has taken on this challenge and focused her efforts on relationship-building and reconciliation.

After the IUPUI planting ceremony, Dr. Harris’ students provided glowing feedback. They were thankful to have had an opportunity to help in organizing the event and to present their work to the assembled group of invited guests. Several students commented that the process of working on their peace declarations had changed their lives and given them a direction for the future they did not have previously, a powerful testament to the importance of such global learning in our university curriculum.

The following video was created by Japanese Studies program student, Devon Miller, who played “Flowers Will Bloom” during the ceremony. The video consists of images of those who participated in the tree planting. Enjoy Devon’s guitar background music, too.

Professor Izumi Harris presented her students' work in the following video as a part of the 2022 IUPUI International Festival - IUPUI SDG Day.