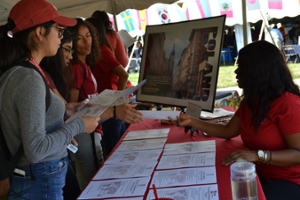 INDIANAPOLIS -- A record number of IUPUI students embarked on study abroad programs to take coursework outside of the country for credit, according to the latest IUPUI tally that was submitted to the Open Doors report on International Students Exchange.

Victoria Sefcsik, a senior who is majoring in supply chain management with a concentration in pre-medicine, said the Kelley School of Business London study abroad program she attended last spring was "absolutely incredible, and is an experience I could not have gotten through the classroom.

"During our trip, we gained knowledge on global financial markets while attending a tour and lecture at Lloyd's of London and learned about the implications of Brexit from two lecturers at Regent's University," she said.

According to university data, IUPUI students who study abroad are more likely to graduate on time and see higher cumulative GPA and faculty engagement.

In addition, study abroad alumni are more likely to have a job within a year of graduating, with starting salaries that are higher than the average college graduate.

IUPUI students visited 46 countries in 2015-16, with the top three destinations being the United Kingdom, Spain and Germany. The top three schools, in terms of numbers of students participating in study abroad, were Kelley School of Business, the School of Liberal Arts and the School of Science.

By class standing, seniors comprised 39 percent of students studying abroad, followed by juniors at 22 percent; professional students at 16 percent; master's students at 14 percent; sophomores at 8 percent; and doctoral and freshman students, each with 1 percent.

To date, unmet financial need remains the top obstacle to students studying abroad. IUPUI has piloted the Planning Scholarship for Study Abroad, which provides $3,333 to use toward study abroad and gives students up to three years to use their award. To qualify, students must meet eligibility criteria, including being a first-generation college student and having at least a 2.0 GPA. Study abroad is also a priority of For All: The Indiana University Bicentennial Campaign, with matching funds set aside by President Michael A. McRobbie for endowed funds for study abroad.